Manipulative experiments are all the rage in animal sex studies. After all, one of the most coveted research outcomes is direct, experimental evidence that this or that sexual feature has an impact on what biologists call “fitness”, that is, an animal’s sexual success, measured in the currency of number of descendants. It all started off with studies in birds, already several decades ago, where researchers would clip tail feathers of swallows, add dots to the chests of grouse, or even stick colourful hats on finch heads; all in an attempt to see how this would alter their sex-appeal. But in recent years, the trend to doll up (or doll down) your experimental animals has gone micro, with researchers using nano-laser guns to zap off fruit fly hairs, for example. 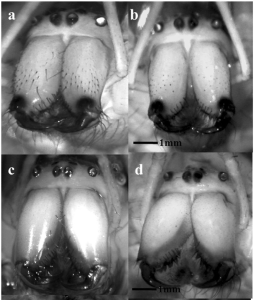 Before and after: the top row shows male and female Leucauge mariana spiders au naturel; the bottom row shows them after the researchers applied their razors to their faces.

In a study appearing ahead of print in the journal Behavioural Ecology and Sociobiology, three spider researchers describe how they shaved the faces of spiders to see how this would affect their sex appeal. And I mean literally shaved: they fashioned miniature razor blades and removed the facial hair from the large jaws of female spiders of the Central American species Leucauge mariana. In these tetragnathid spiders, the couple locks jaws during copulation and while the male transfers his sperm to the female, he moves his jaws in such a way that they tickle the hairs on the female. After mating is over, and if the female has not shooed the male off in mid-mating, she sometimes produces a glue-like substance to cover her vagina with; a sign that she is going to use this particular male’s sperm for fertilizing her eggs and will not entertain any other suitors for a while.

What the researchers found is that this tickling during mating is crucial for the female’s inclination to allow the mating to continue and also for her decision to produce the post-coital sperm plug. A shaved female, who no longer has hairs with which to register the male’s tickling, much more often would interrupt copulation by pushing the male away, or would refuse to apply a sperm plug after mating. Also she would be more inclined to mate with a subsequent male. And shaving off the hairs from the male’s jaws would, by and large, have the same effects, since he no longer has the tools to tickle the female with.

In other words: in Leucauge mariana, a good tickle during sex makes a male irresistible. And he gets the offspring the prove it.