Want to tell one species from another (identical-looking) one? Check their genitals! That’s the rule of thumb applied by taxonomists worldwide. In fact, many an identification manual, be it for cicadas, spiders, or snakes, often supplies little more than detailed images of the genitalia to assist in the identification of species that look very similar on the outside. My book Nature’s Nether Regions is all about why this would be so–which evolutionary processes are responsible for the breakneck speed by which genitals evolve and change their shape and function all the time. But surprisingly, nobody had ever actually measured the evolutionary rates of genitals and compared these with those of other organs. Nobody, that is, until Julia Klaczko and colleagues of Harvard University did so and reported on it in a new paper in Journal of Zoology last week.

What Klaczko and colleagues did was take a closer look at Anolis lizards. Almost 400 species of these colorful lizards are known, and especially the Caribbean species are famous among evolutionary biologists for adapting rapidly in body shape to their local environment. The researchers picked 25 Anolis species. For each species they selected 30 specimens and took measurements from their legs, dewlaps (a colourful skin fold under the chin) and one of their penises (like all lizards, a male anole is doubly endowed with two “hemipenes”). They then calculated how fast each of these organs evolved, by plotting the traits on the lizards’ evolutionary tree. And they found that, as expected, the genital shapes evolved faster than the other organs. About six times as fast, in fact.

Each of these pictures shows one of the two hemipenes of five different Anolis species. The picture on the right shows the measurements that the researchers took.

The graph below shows how fast the lizards’ penis shape evolves compared with their legs and dewflap. The horizontal axis shows the evolutionary time separating two species, and the vertical axis shows the difference in organ shape. The line that climbs the fastest shows the genital evolution; the other lines (which climb slower) are for dewlap and limbs. 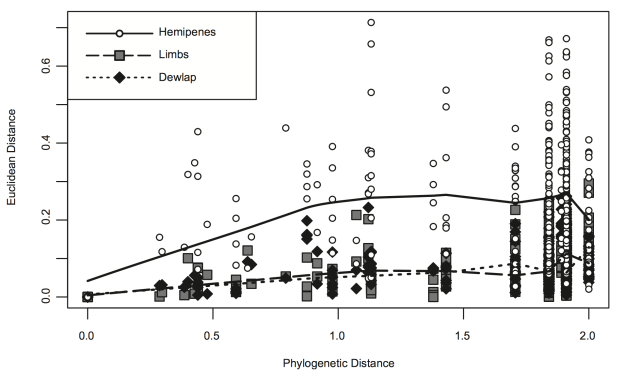 A video (in Portuguese) on Julia Klaczko research: